If you have not checked out my other series, “Getting Started with Bicep” then I would highly suggest starting there so you can familiarize yourself with Azure Bicep including some basic syntax and how to write your first template. This article will walk you through more advanced syntax topics including output variables, loops and more!

Comments in code help you or others figure out what something may do or why it’s there in the first place. While it does not replace full documentation, it is a great way to get a picture of what your code does.

You can comment a single line of bicep code by adding ‘//’ to it. In the example below you can see my comment added to the tagging resource that we will go over next!

With Bicep, you may find that one resource you are deploying must be deployed after another one. When you run into a situation like this you can use the dependsOn property so the resource is never created prior to the other. It’s important to remember that even if you declare a resource later on in your template, it may still be deployed prior to something declared earlier. 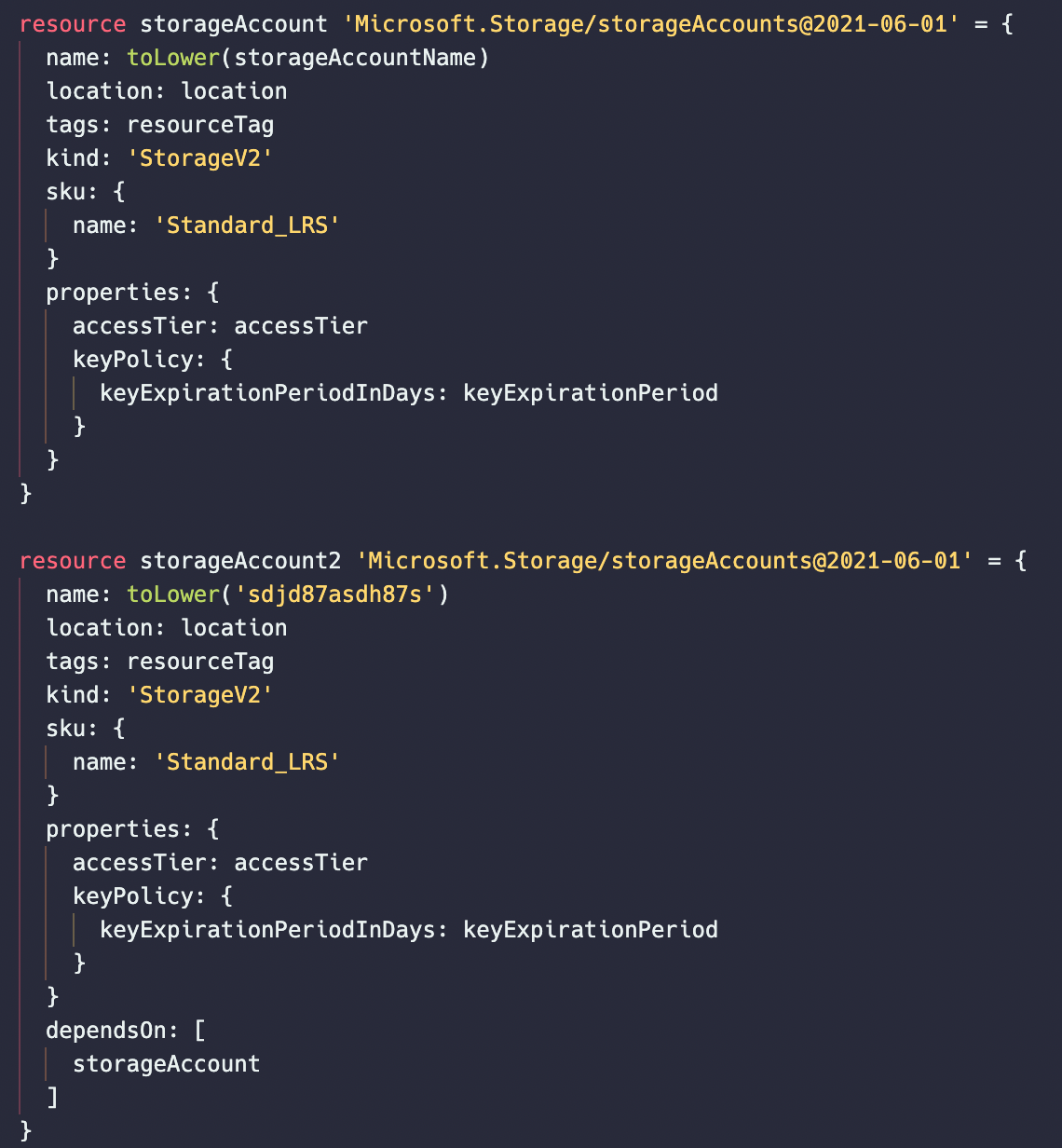 Output variables allow you to gather information from your deployment and output them so you can review them quickly and easily. Output variables should be at the end/bottom of your bicep deployment script. In my example below I am creating a new output variable named allowPublicAccess (make sure to pick a name that tells you what the value means from a quick glance) that will display a boolean value (true/false) on if my newly deployed storage account allows blob public access.

If I then go into the Azure Portal, select my Resource Group and click ‘Deployments’ I can review the output variables and values from my deployment. 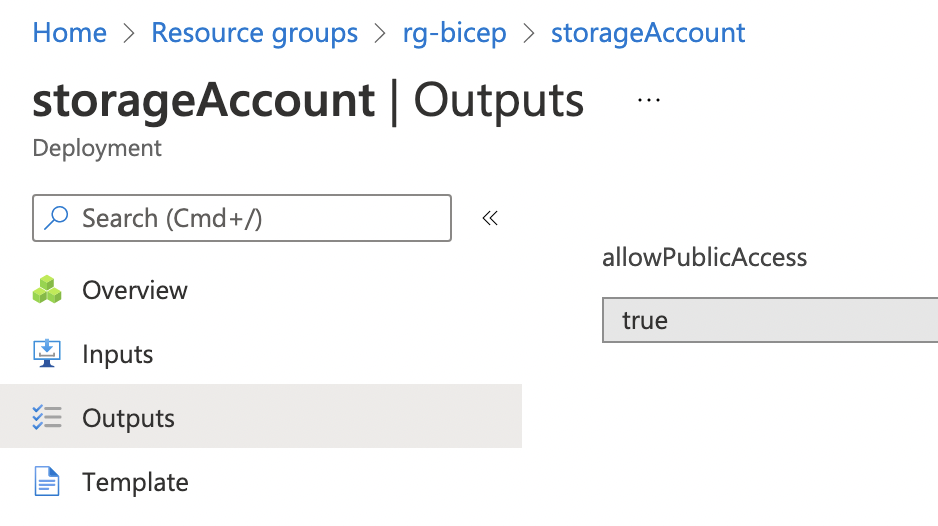 Tags consist of a name and a value pair. Example: you can have a tag with a name Department and possible values of IT, Accounting, HelpDesk, and so on. Both the name and the value of tags are case sensitive.

There are some limitations on tags:

Using the same Bicep code example from the Getting Started series, you can see I added a new parameter object called resourceTag. Then in my storage account resource I added the object to the tags property.

And when I deploy it, it sees that I already have the storage account deployed in my Azure environment but it is missing the defined tag. So it will make a change to that resource and tag it. 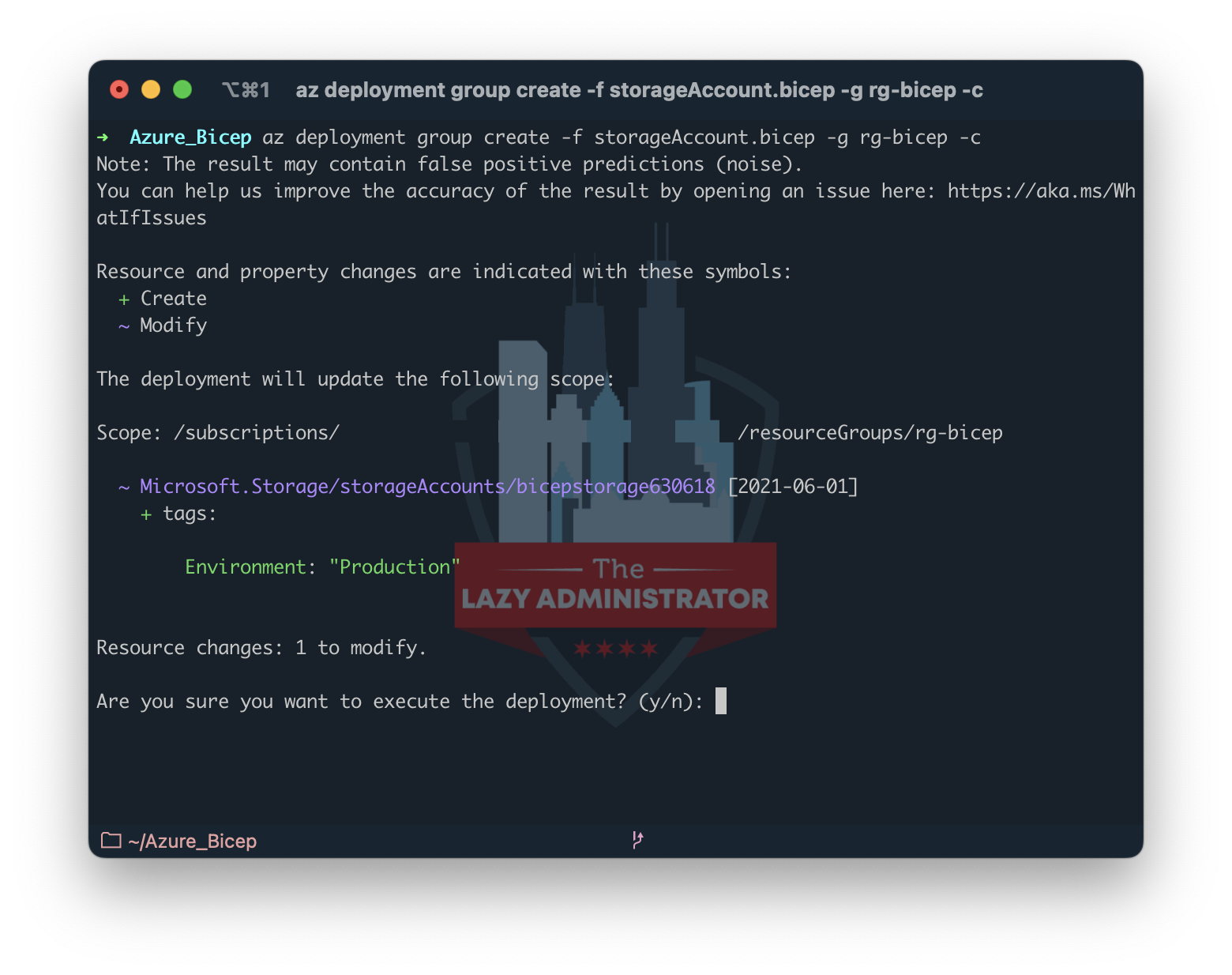 Loops are an important item with Bicep, they enable you to easily create same resources without having to copy and paste the declaration over and over. In my example below I created a new Bicep template to deploy 3 Storage Accounts. On line 6 I created an array of my Storage Account names and then line 12 I am iterating through that list in the For statement. ‘Think of it as foreach item in the array do the following’

The new symbolic name is created on the for line called “storageAccountName” which only exists within my loop. I use that symbolic name on line 13 which gives my new Storage Account its proper name.

When I begin the deployment of this Bicep template I can see that it will correctly create my three new Storage Accounts. 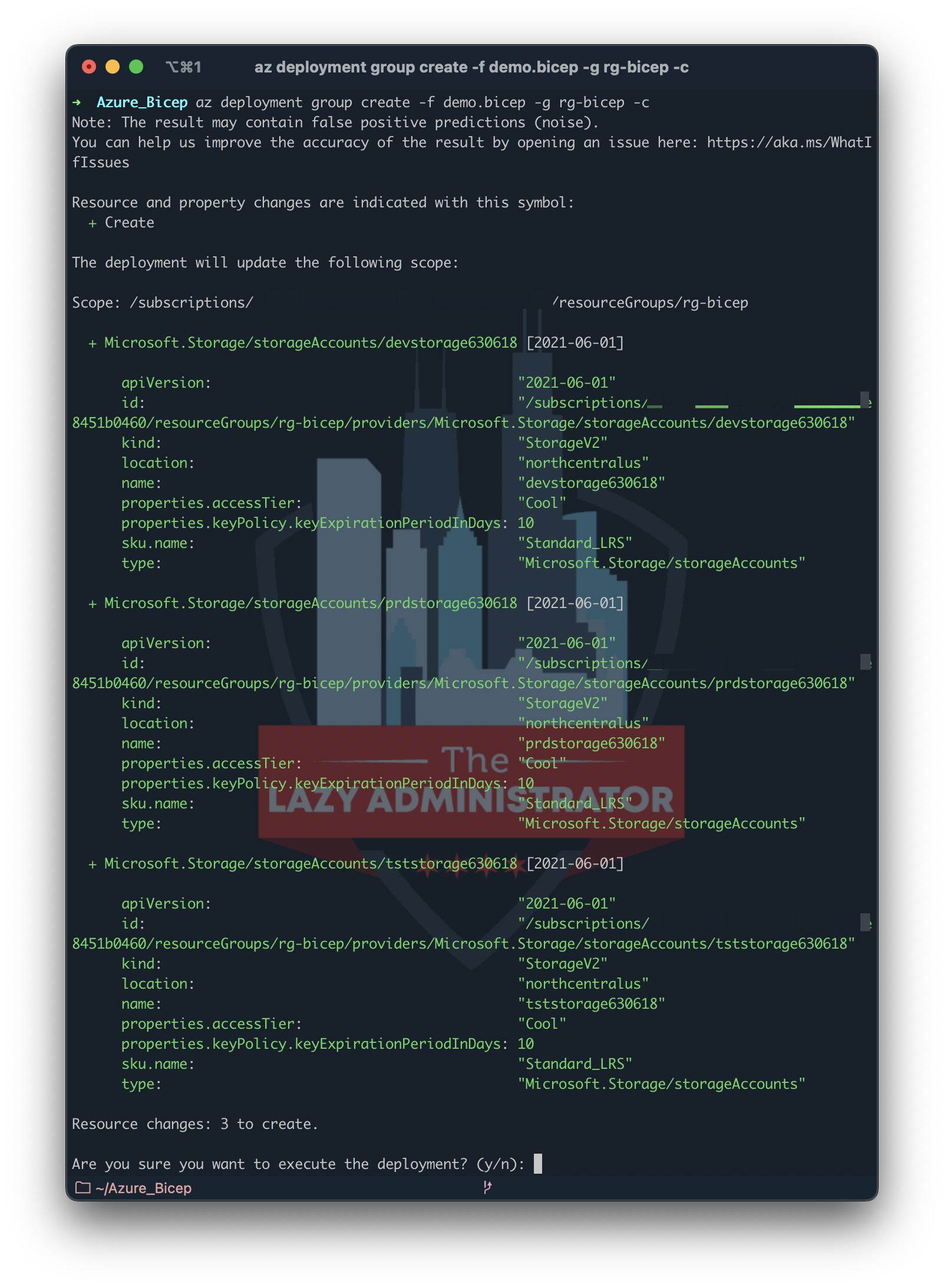 Viewing the deployment details, I can see my newly created Storage Accounts!

In the first example, we used an array to set a single property, ‘name’. What if we wanted to set not only name but also the access tier of each new Storage Account? 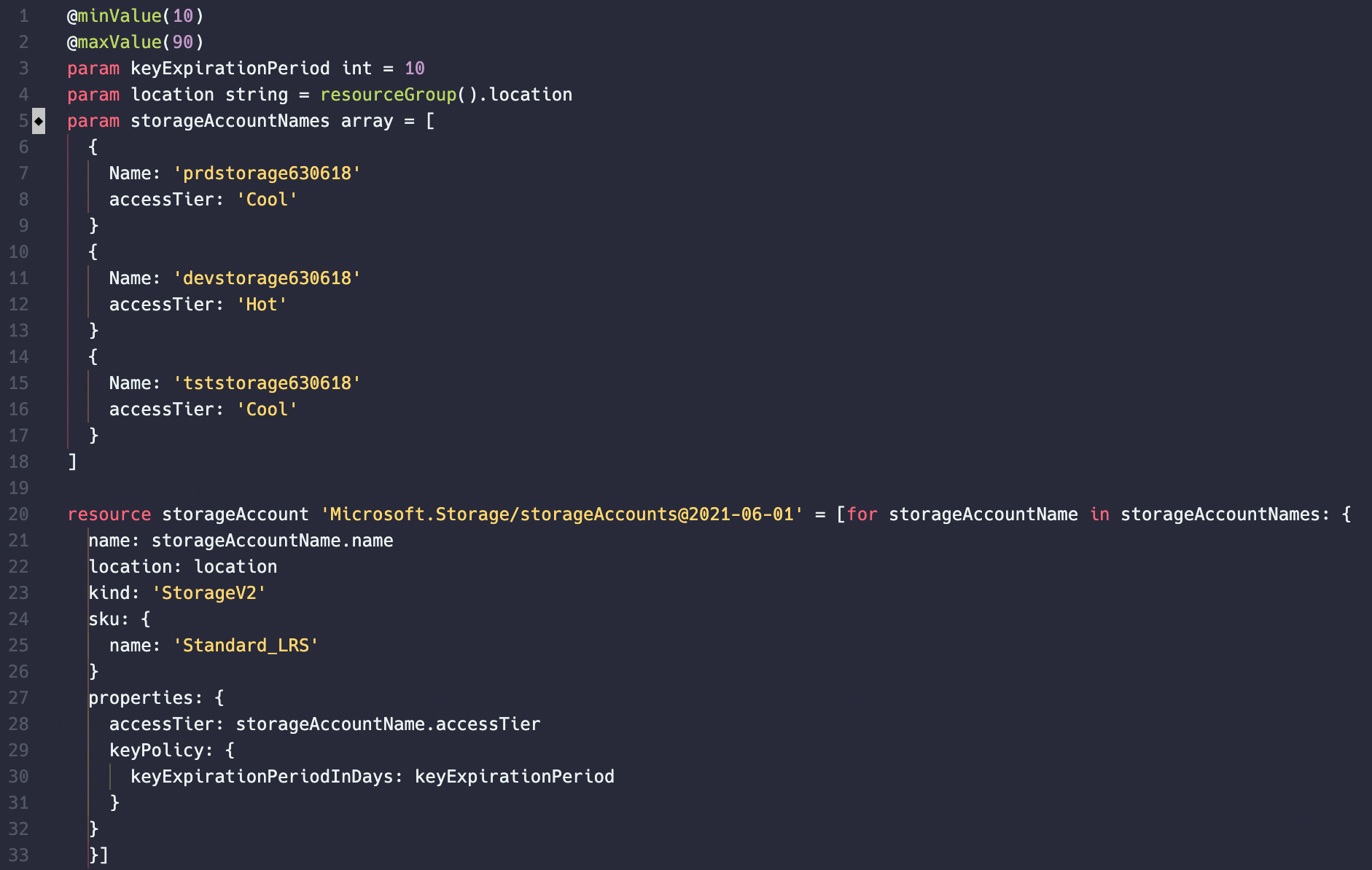 After deploying this to my test tenant, I can see that the dev Storage Account changed from cool storage to hot! 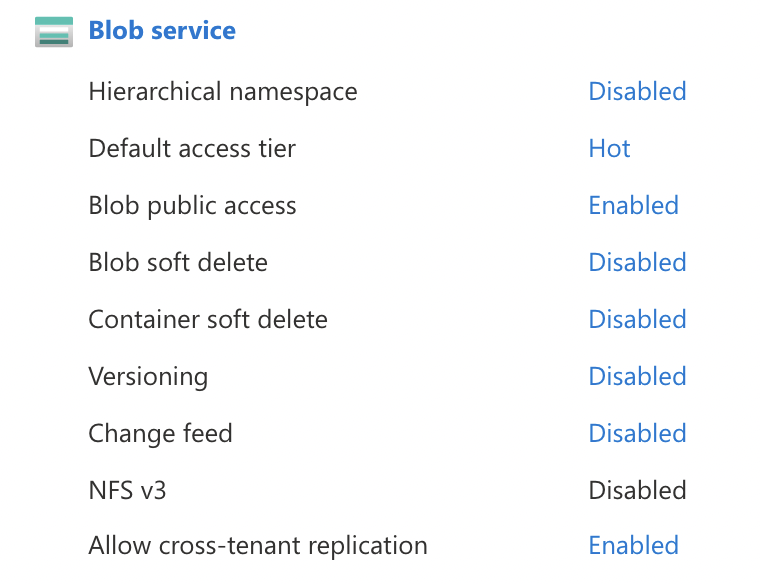 Azure Bicep supports a wide array of functions. You can review this list that will show you all the different functions that are available. We will go over some of the more common ones.

Bicep supports a function called any() to resolve type errors in the Bicep type system. You use this function when the format of the value you provide doesn’t match what the type system expects. For example, in the below snippet, on line 13, the diskSizeGB is expecting a int value but I gave it a string value (defined on line 4). By using the any() function it will ignore the error and simply convert the value type from string to int.

This function doesn’t exist in the Azure Resource Manager template runtime. It’s only used by Bicep and isn’t emitted in the JSON for the built template. 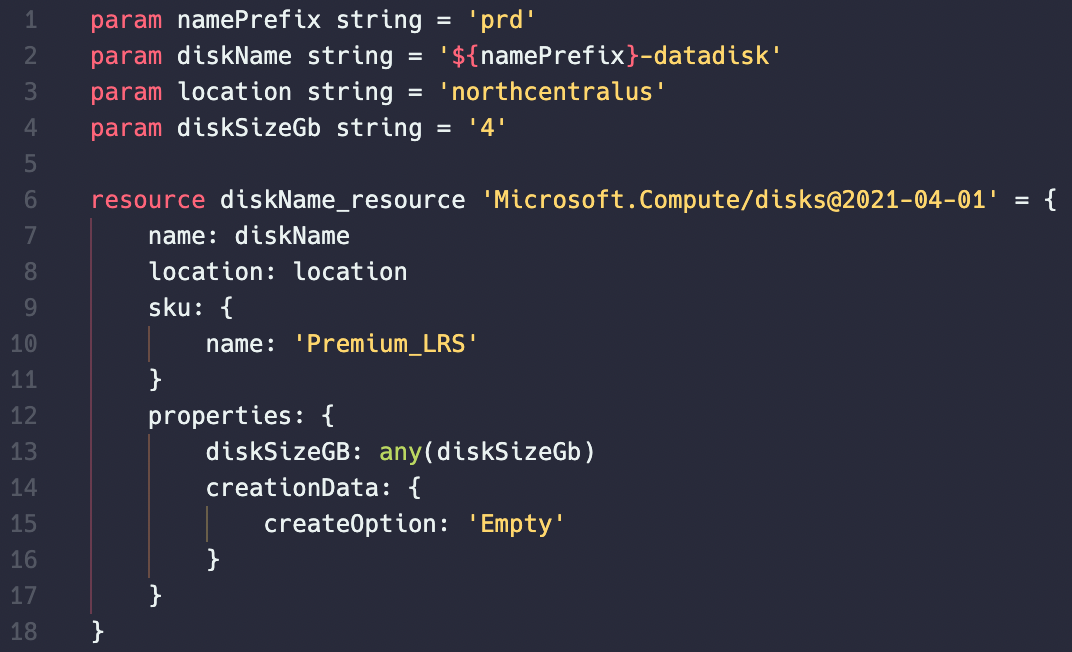 And during my deployment I can see that I was not presented with any errors or warnings and will create the resource in Azure. 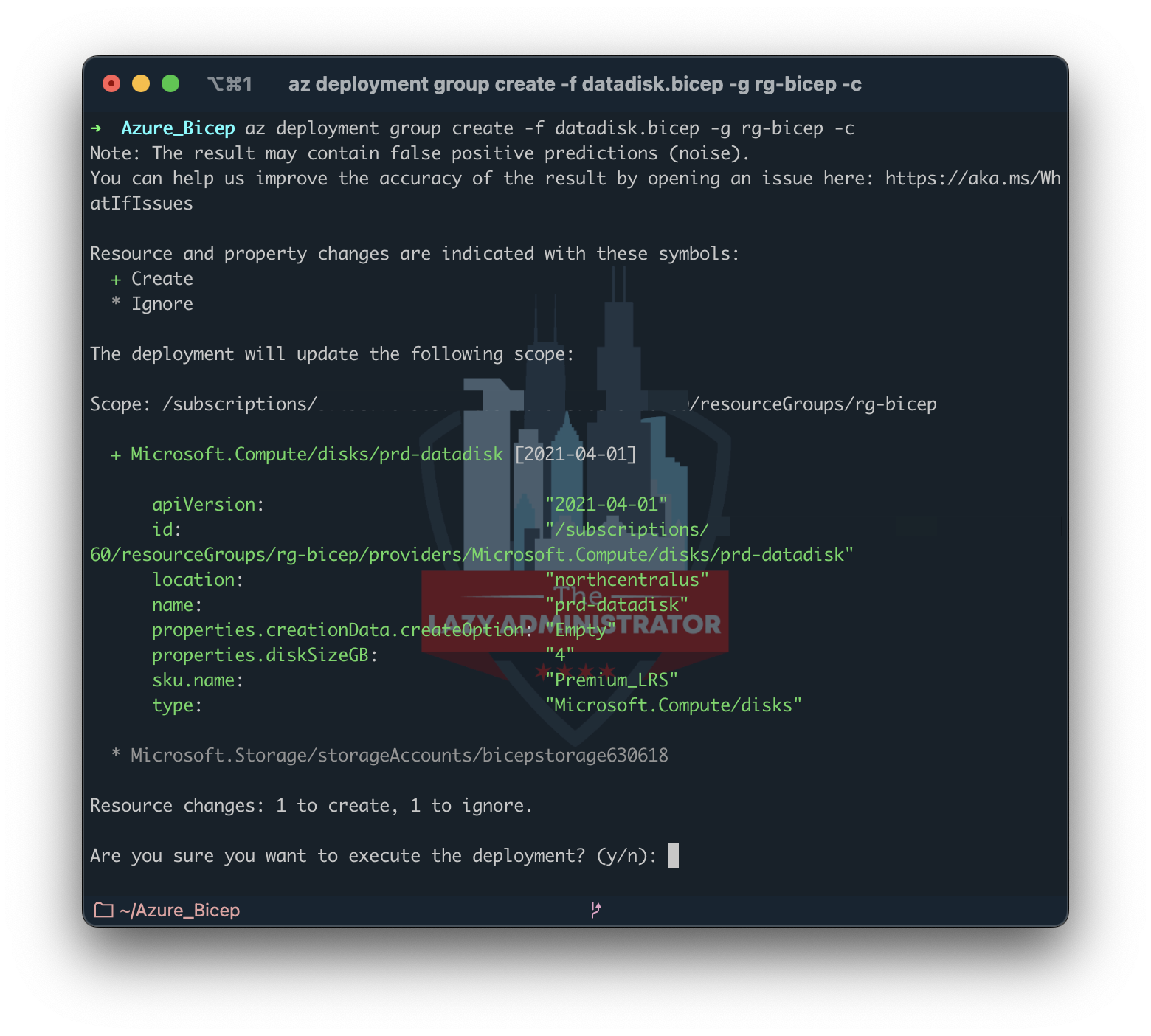 In the example below you can see I changed the param location (line 5) from ‘northcentralus’ to whatever location my Resource Group has. 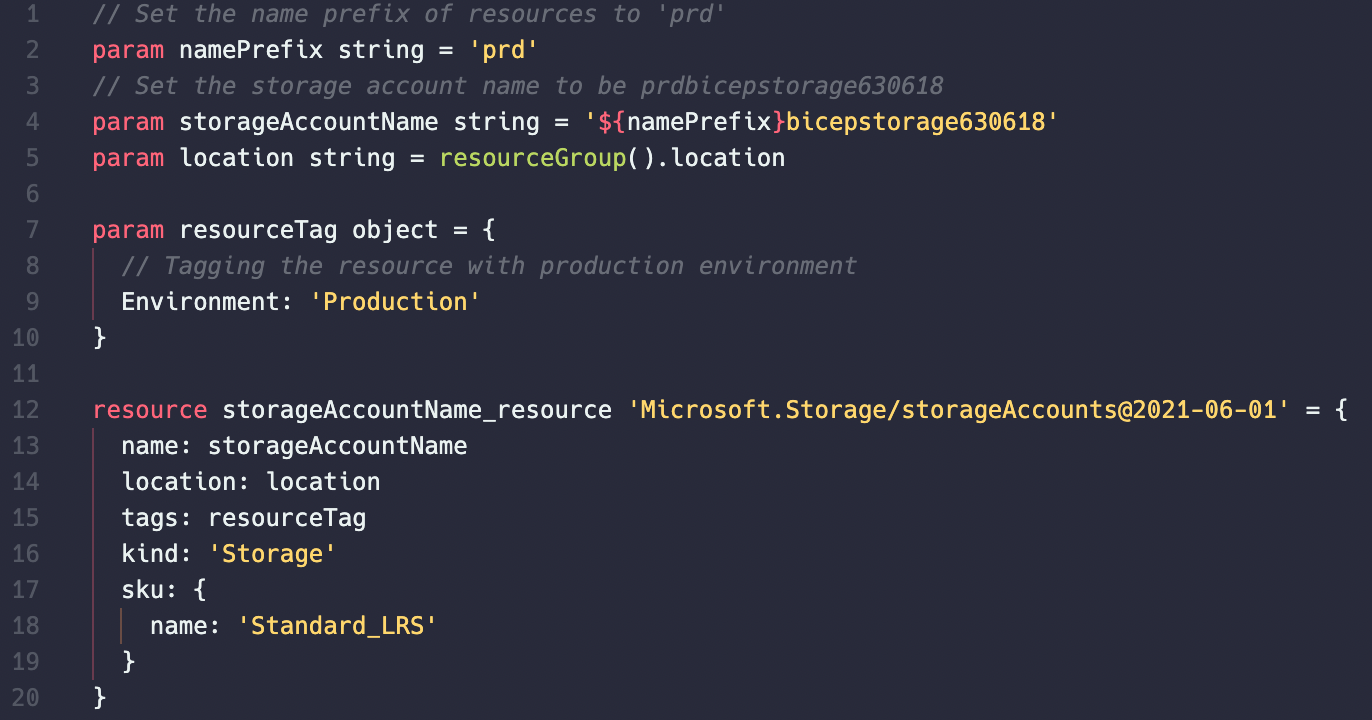 In the example below I declared a new parameter named ‘namePrefix’ that contains the value, ‘prd’ which is short for production. Usually I would create resources with a prefix followed by a hyphen but Azure Storage Accounts do not support this naming so I have to exclude the hyphen. I then modified line 4 so the storageAccountName param would include the value from the namePrefix param. During deployment it will name the Storage Account ‘prdbicepstorage630618’.

When doing string interpolation, you need to enclose it with {} brackets and add the dollar sign ($). 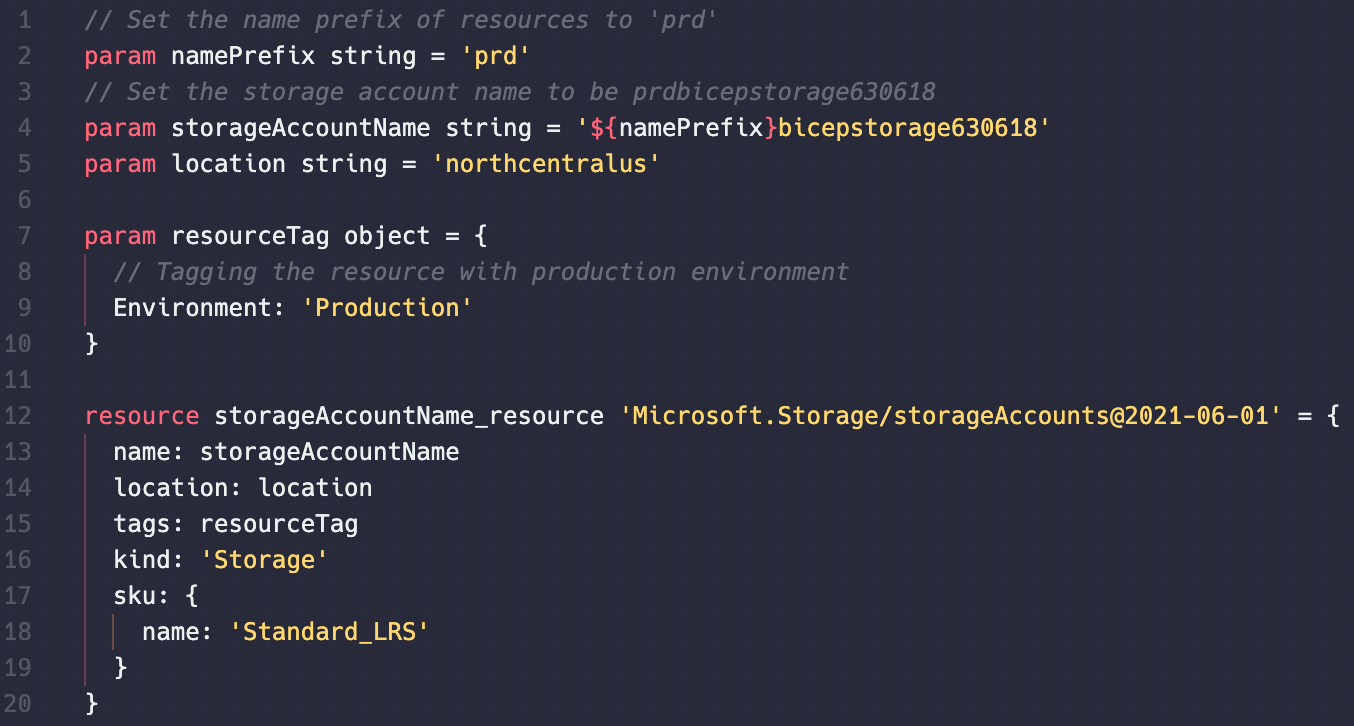 toLower() converts the specified string to lower case. This can be handy if you are getting the value at runtime and you want to ensure whatever the individual puts is converted to all lowercase.

In the example below, I am creating the Storage Account name on line 4 and it contains some uppercase characters. Line 13 where I am declaring the name and value, I use toLower() to convert the entire string to all lowercase. The resulting name will be prdbicepstorage630618.

Note: Since Storage Accounts in Azure cannot have upper case characters in the name, it may be a good idea to use toLower() to ensure names remain valid. 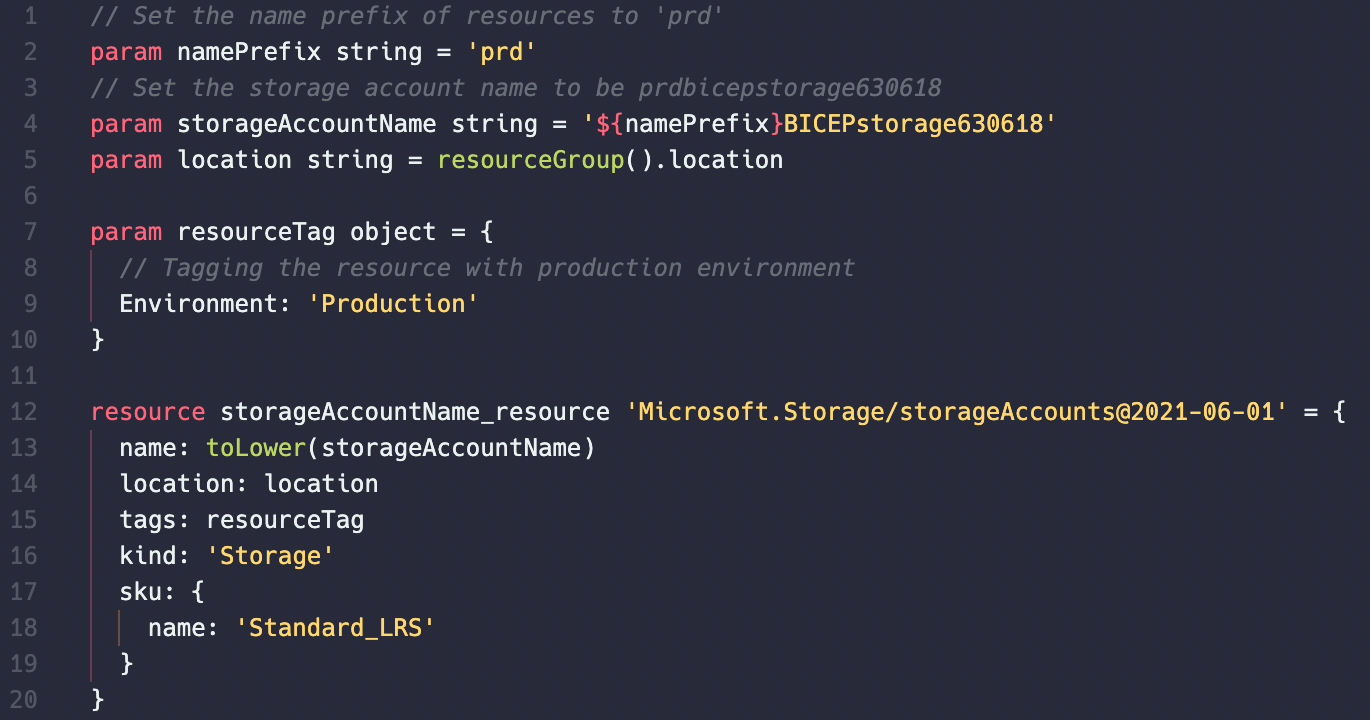 toUpper() converts the specified string to upper case. This can be handy if you are getting the value at runtime and you want to ensure whatever the individual puts is converted to all uppercase.

In the example below, I am creating the Storage Account name on line 4 and it contains some uppercase characters and lowercase characters. Line 13 where I am declaring the name and value, I use toUpper() to convert the entire string to all lowercase. The resulting name will be PRDBICEPSTORAGE630618.

Note: Storage Account name cannot contain uppercase characters so this will result in an error.

Evaluates a condition and returns a value whether the condition is true or false. Think of this as ‘if true do the first thing, if false do the 2nd thing’

In the example below I added a new boolean (true/false) param called hotAccessTier. On line 23 in the new properties portion I am saying if the param hotAccessTier is true, then set the storage account’s access tier to ‘Hot’, otherwise it should be set to ‘Cold’. 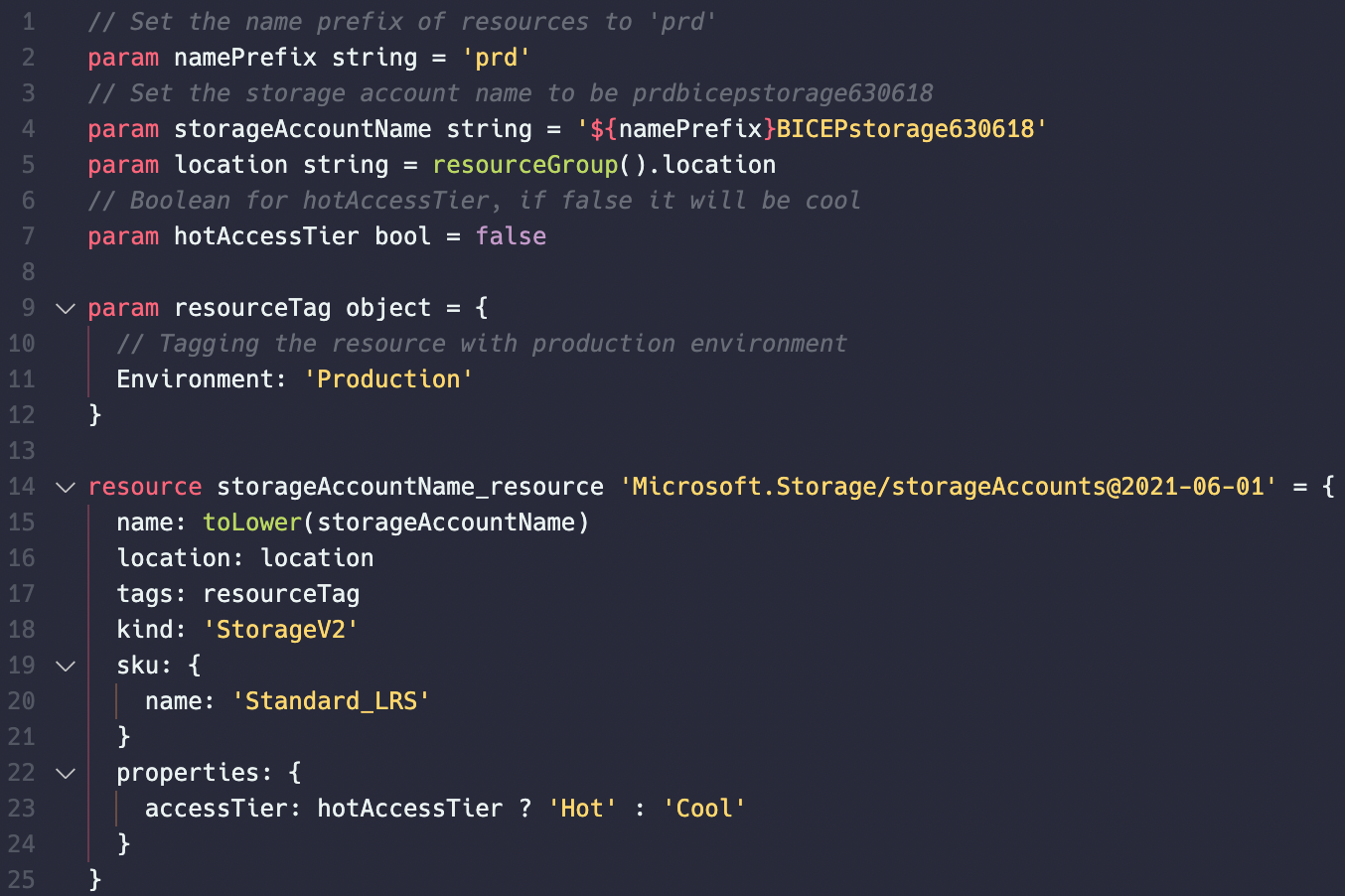 Parameter decorators are in the format @expression and are placed above the parameter’s declaration. You can mark a parameter as secure (@secure), specify allowed values (@allowed), set the minimum (@minLength) and maximum length (@maxLength) for a string, set the minimum (@minValue) and maximum value (@maxValue) for an integer, and provide a description (@description) of the parameter.

The following table describes the available decorators and how to use them.

The allowed decorator specifies allowed values for an item. Looking at the earlier example we can make it so only the ‘Hot’ and ‘Cool’ values are available and nothing else. In the example below I changed the param from a boolean to a string and I declared that only Hot and Cool values are allowed by using the @allowed param decorator above. Since I did not set a default by declaring a value for the param (param accessTier string = ‘Cool’) then during deployment it will ask me what the access tier should be. 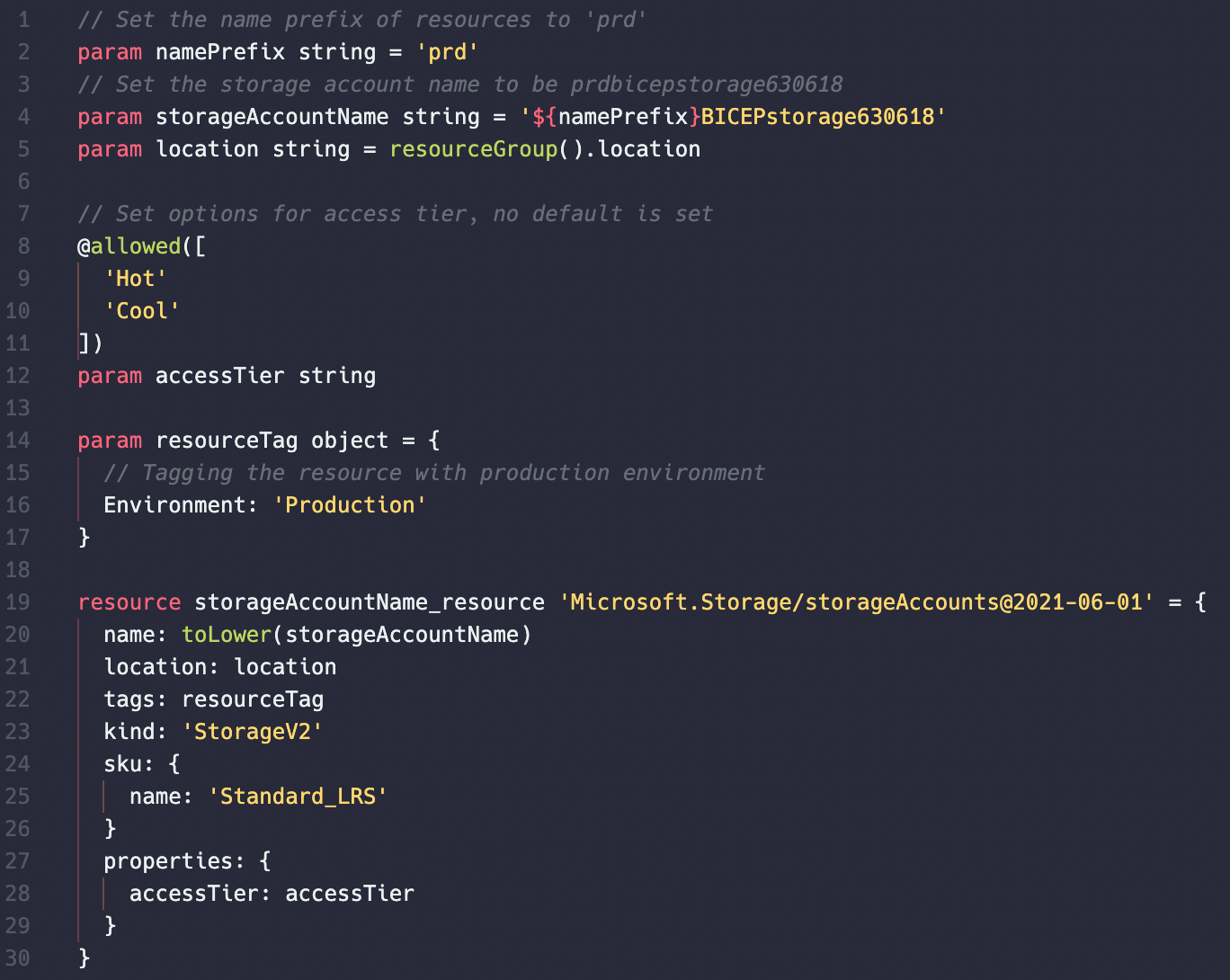 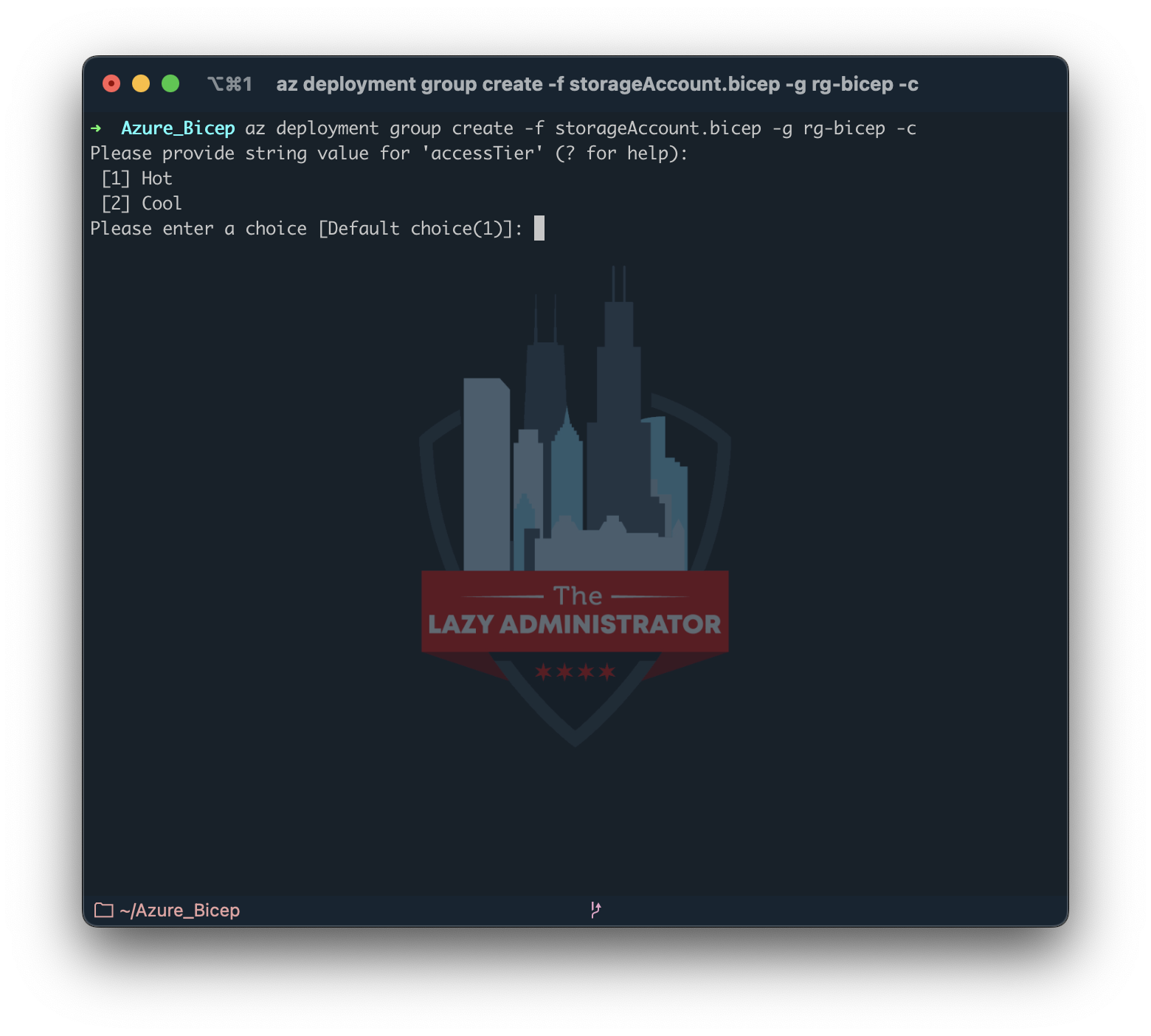 Looking at the above example, it may be unclear what you are setting, especially if you name your parameters poorly. Using the Description param decorator I can provide a much more friendlier message. The description value is only shown during deployment if you enter ‘?’ for help. 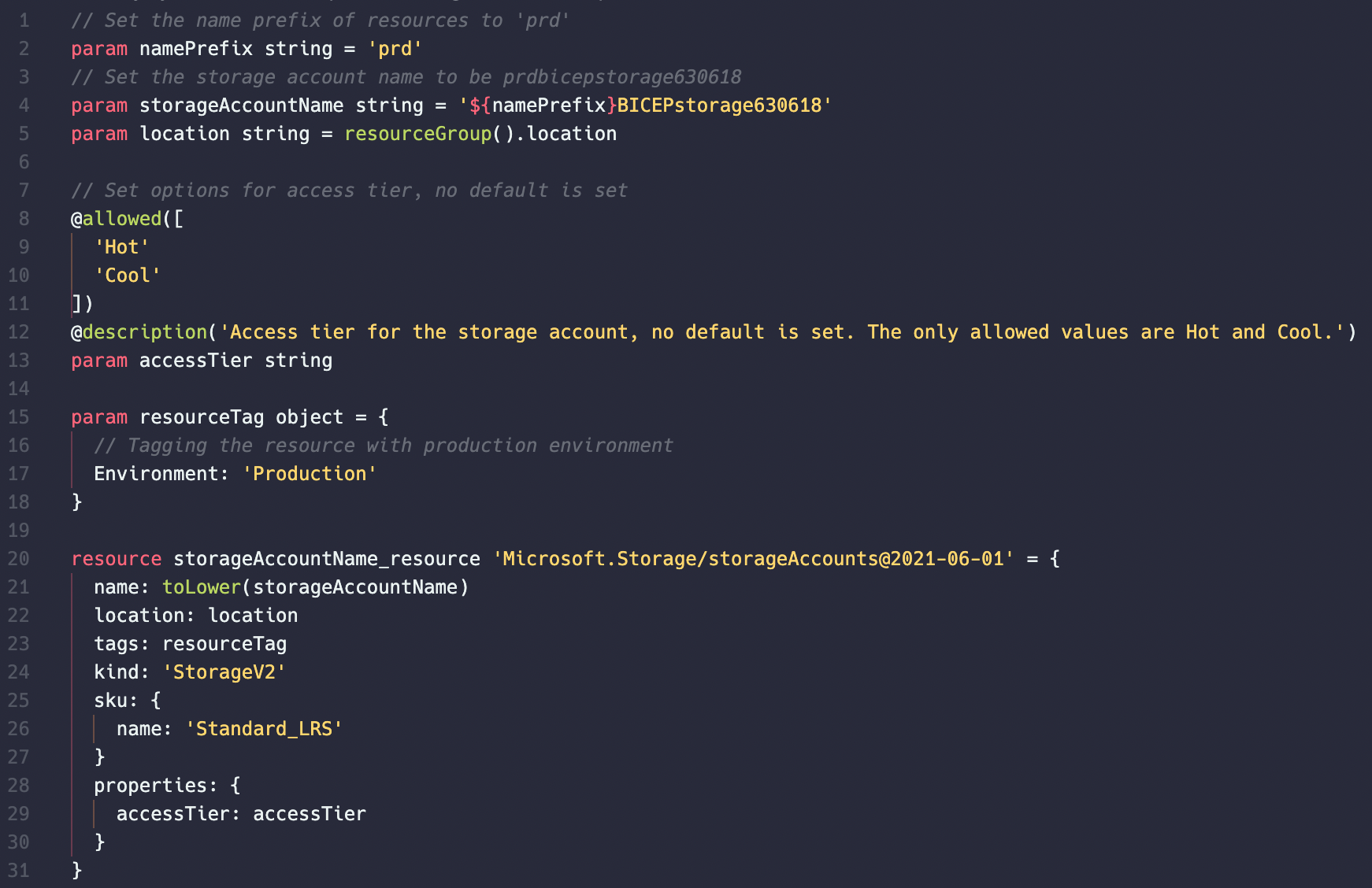 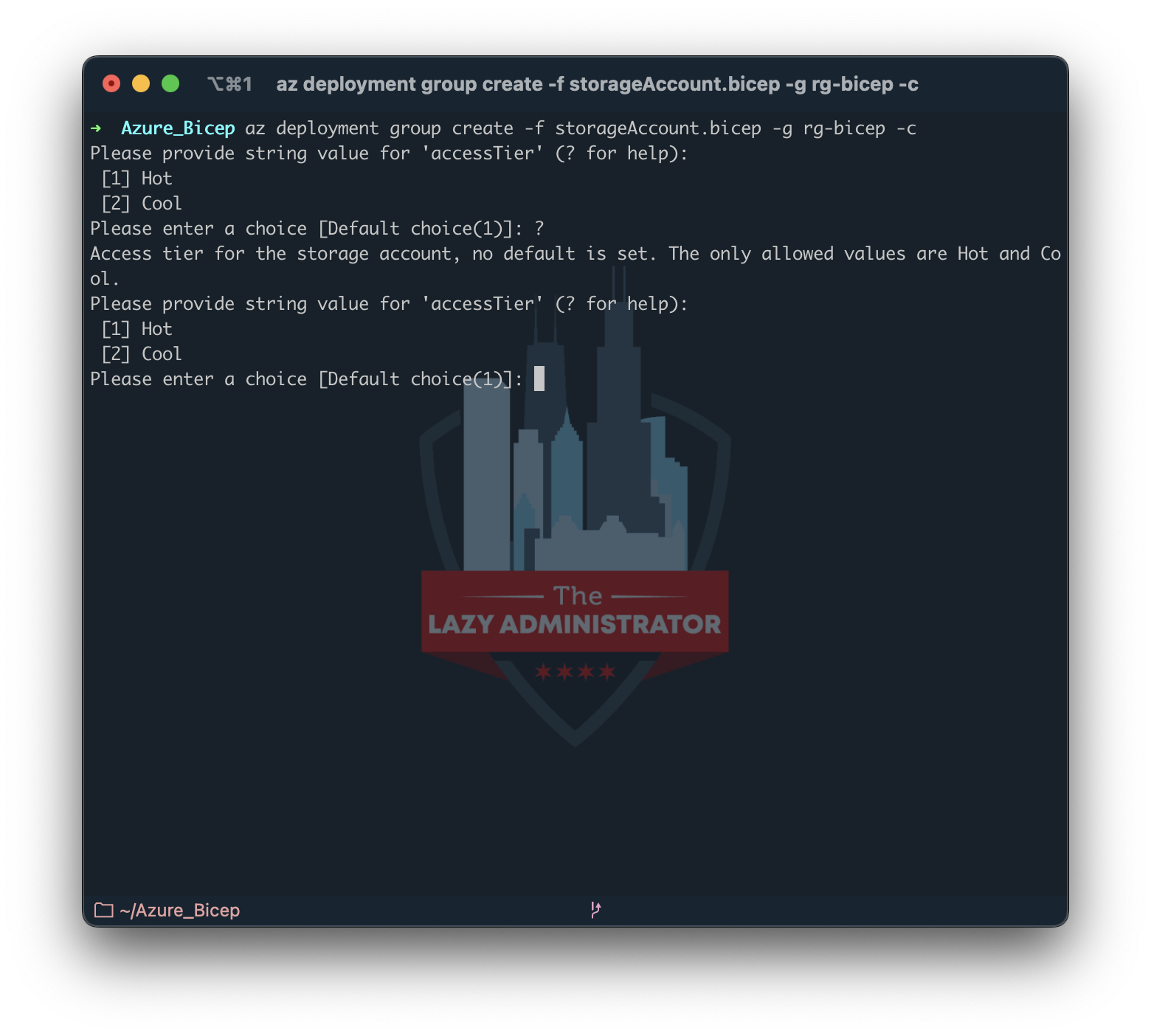 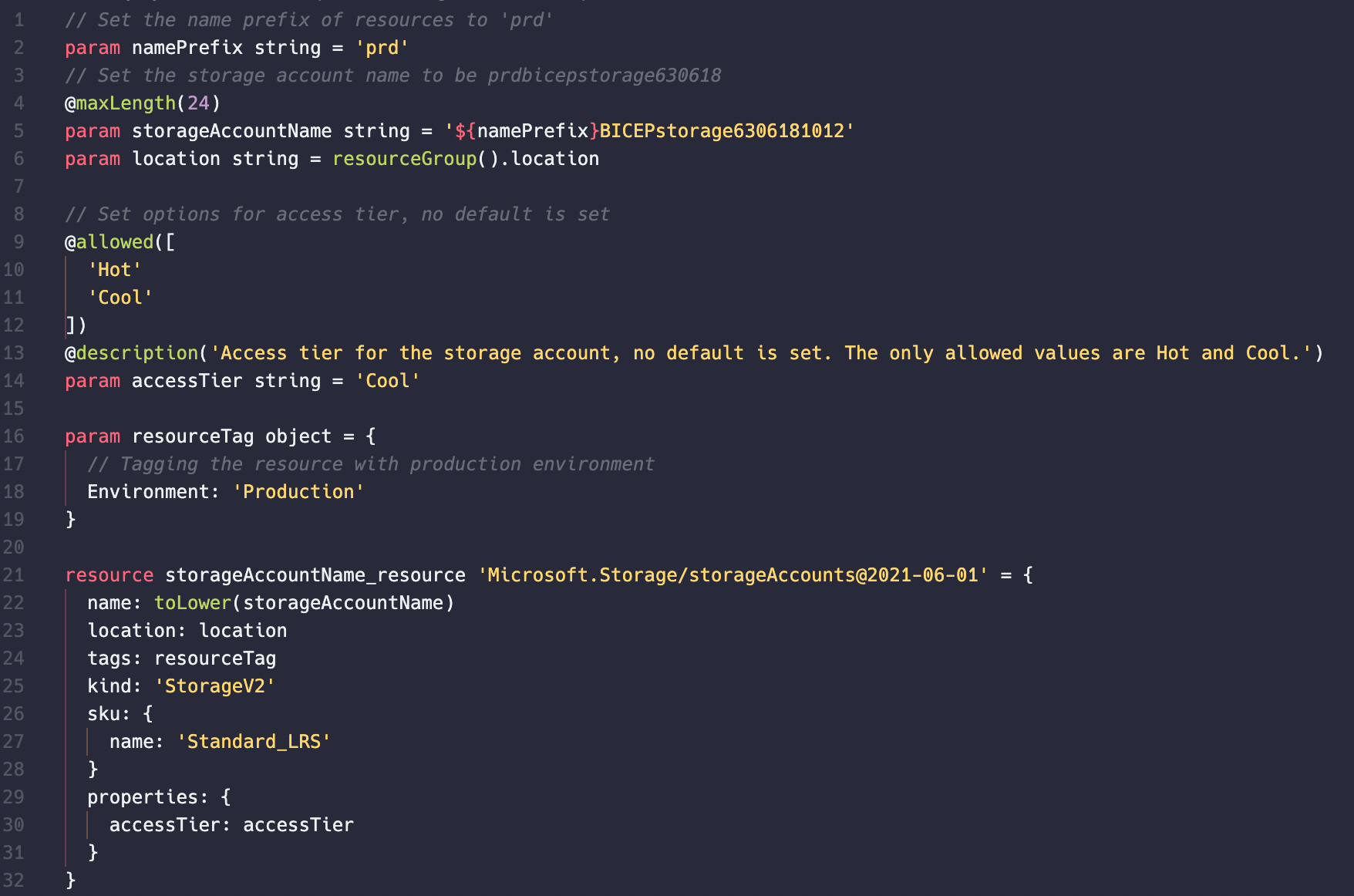 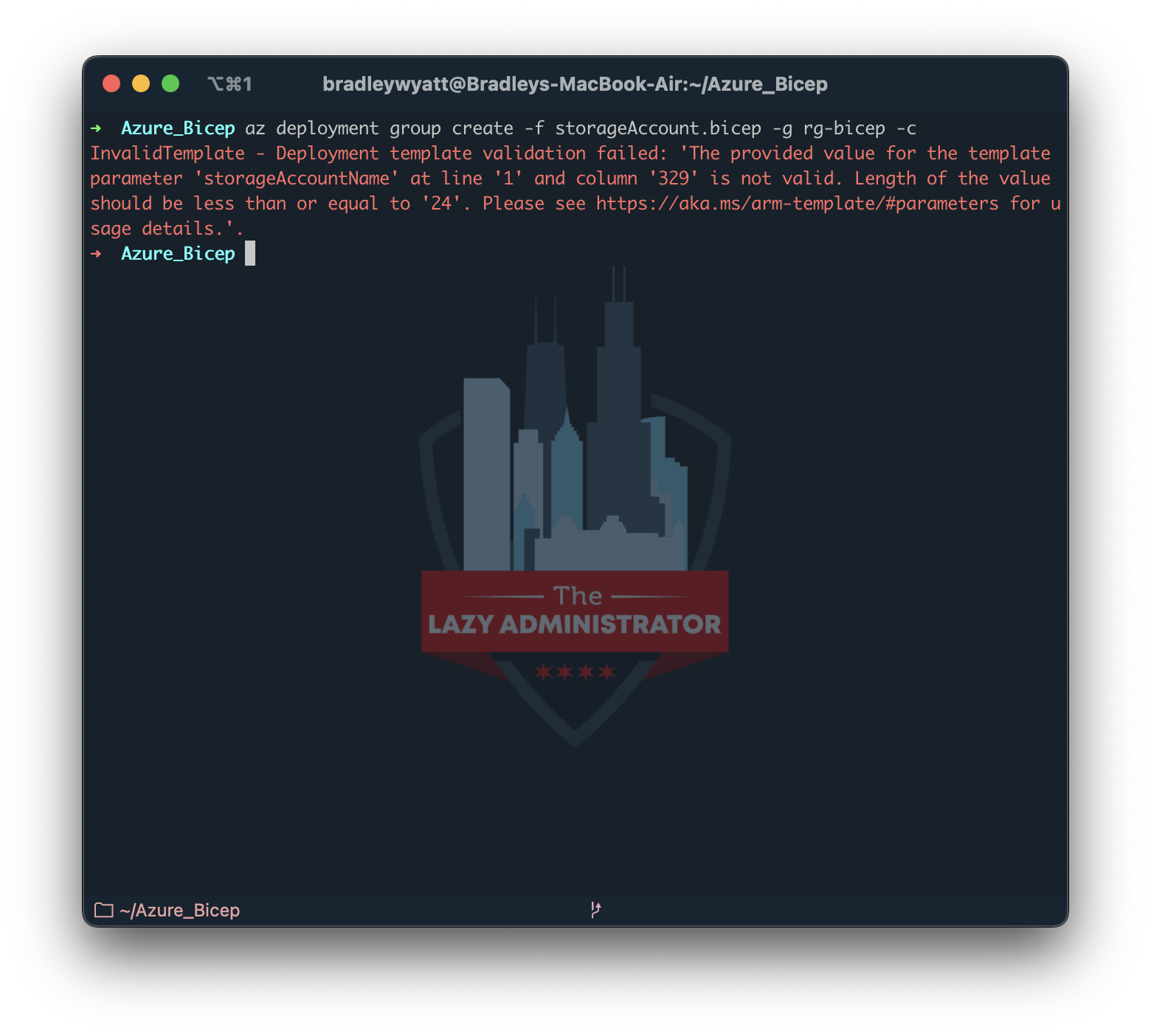 Storage Account names also have a minimum value of 3 characters. We can use the minLength decorator to ensure a value below that number will fail validation. 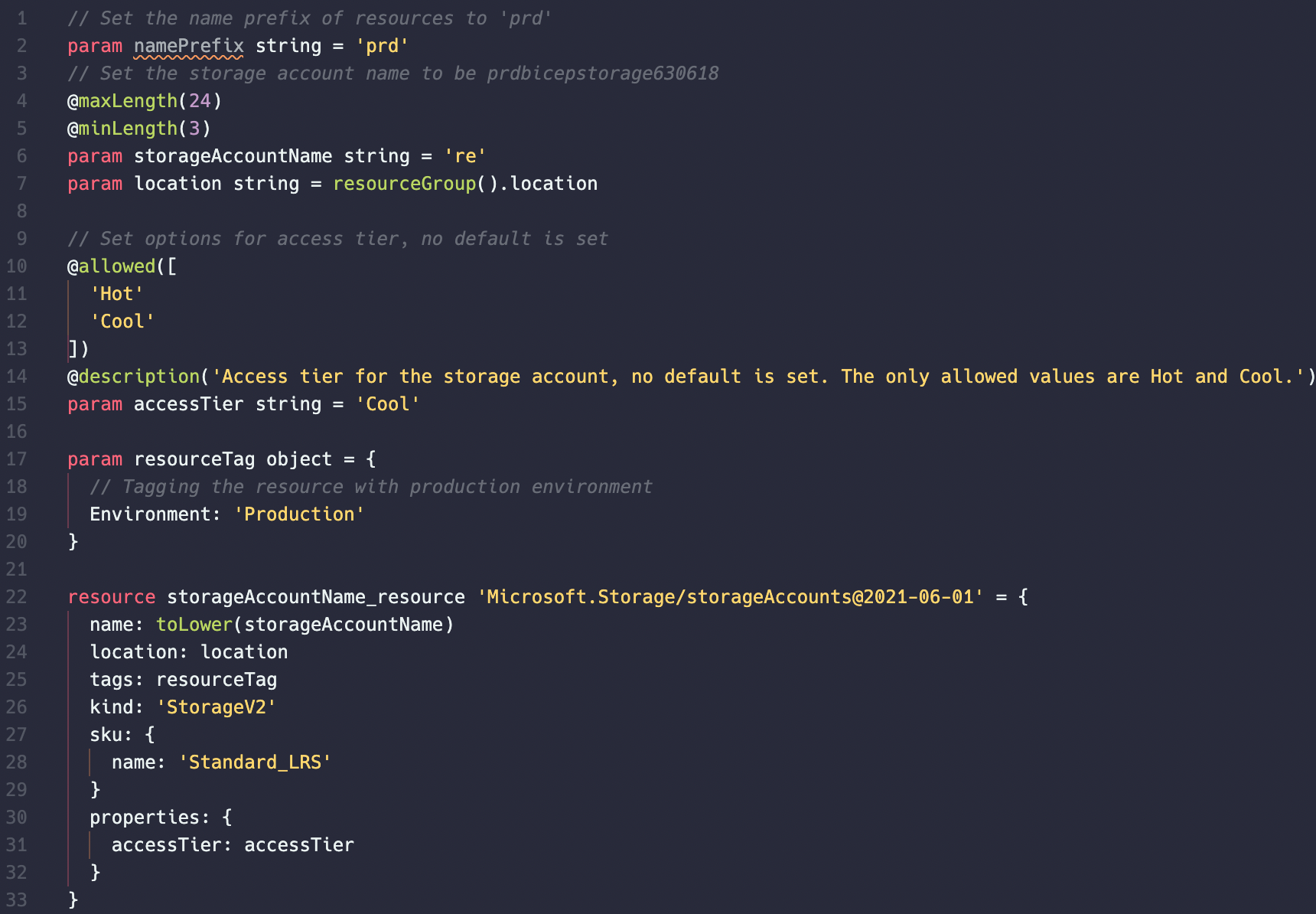 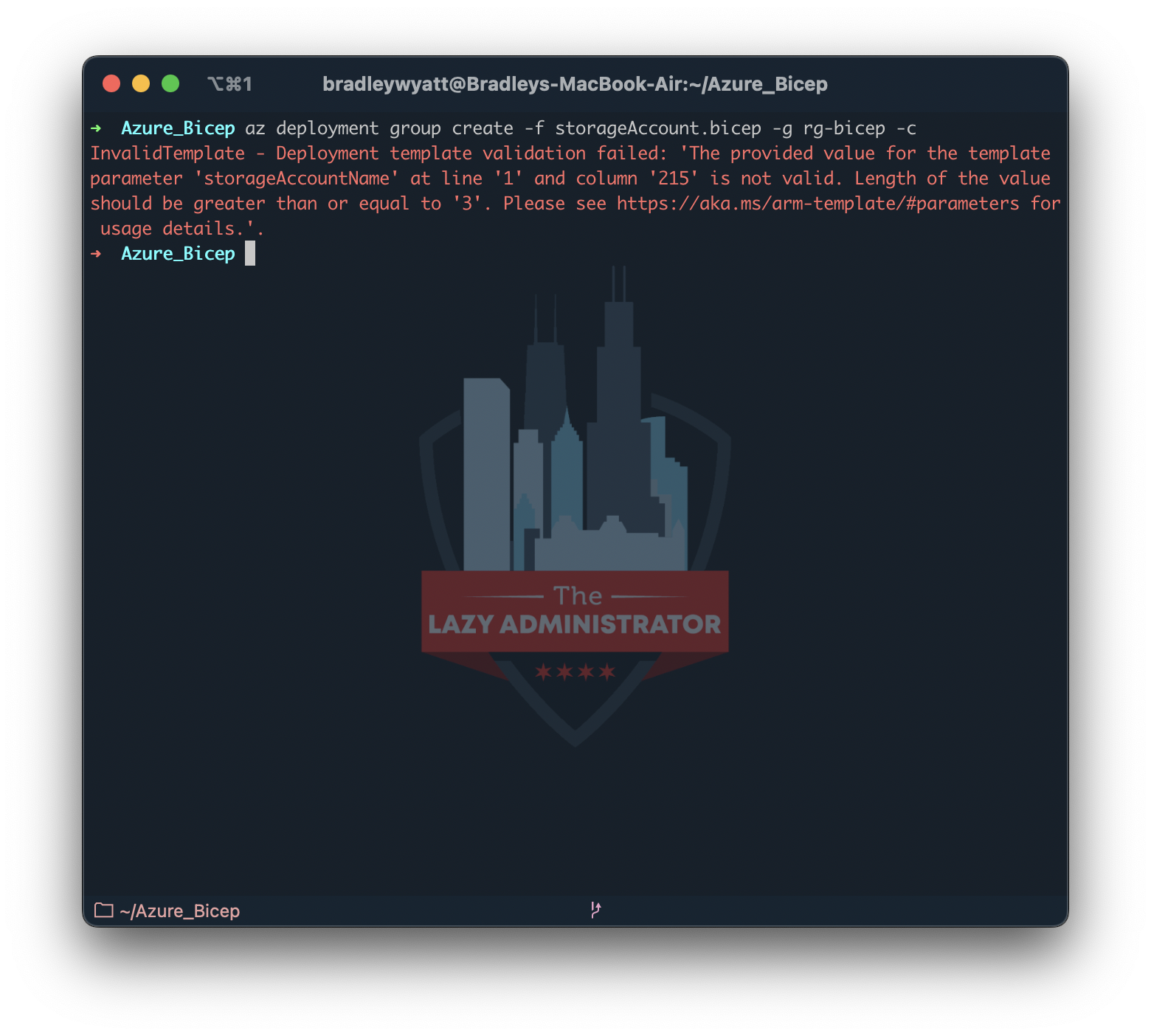 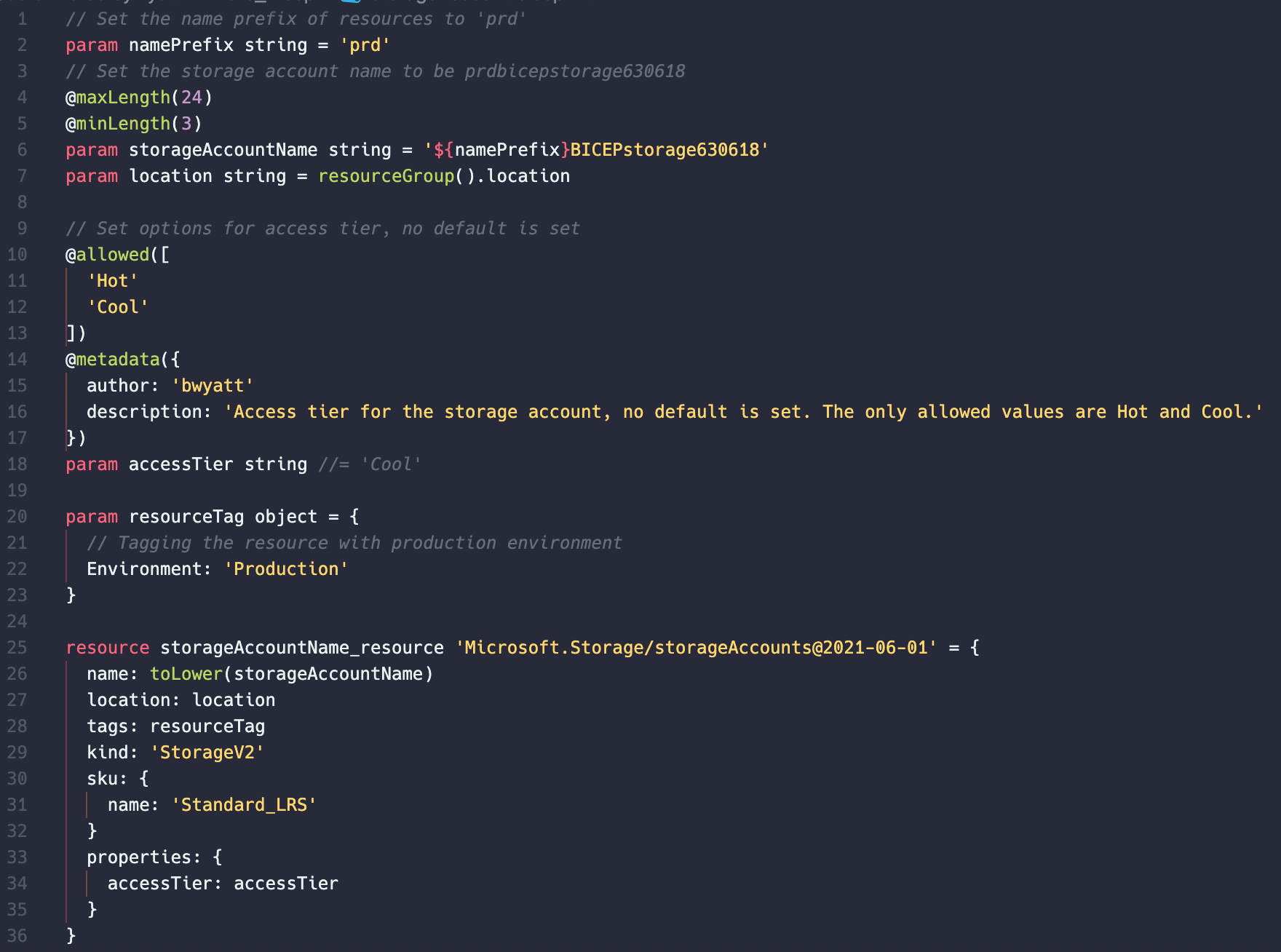 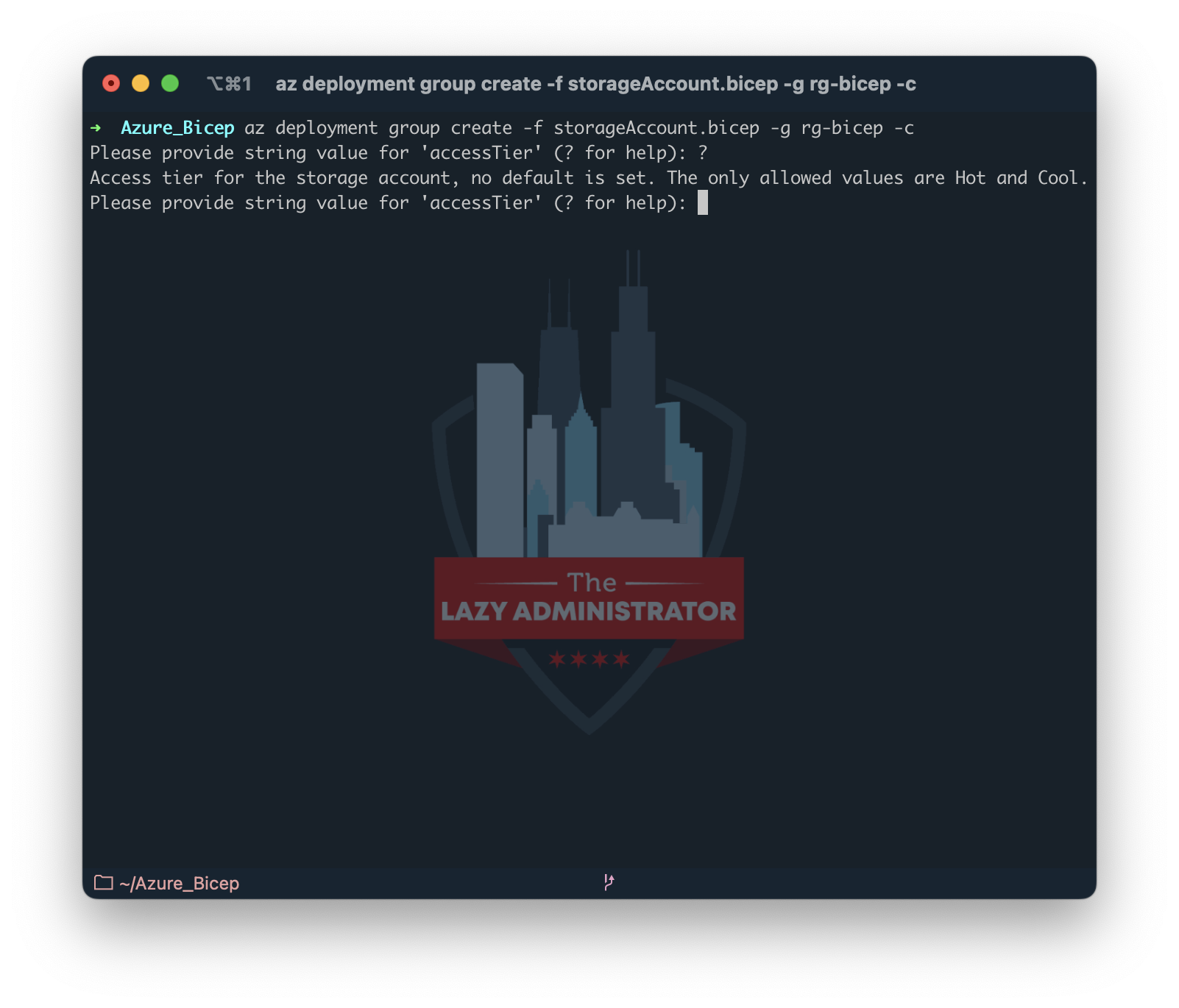 minValue is an integer parameter decorator. Meaning instead of setting a minimum amount of characters in a string, it sets a minimum number value.

In the example below I added a new property (line 38-40): ‘keyExpirationPeriodInDays,’ which sets your storage account’s access key rotation value. I set a minvalue on line 25 of the parameter. 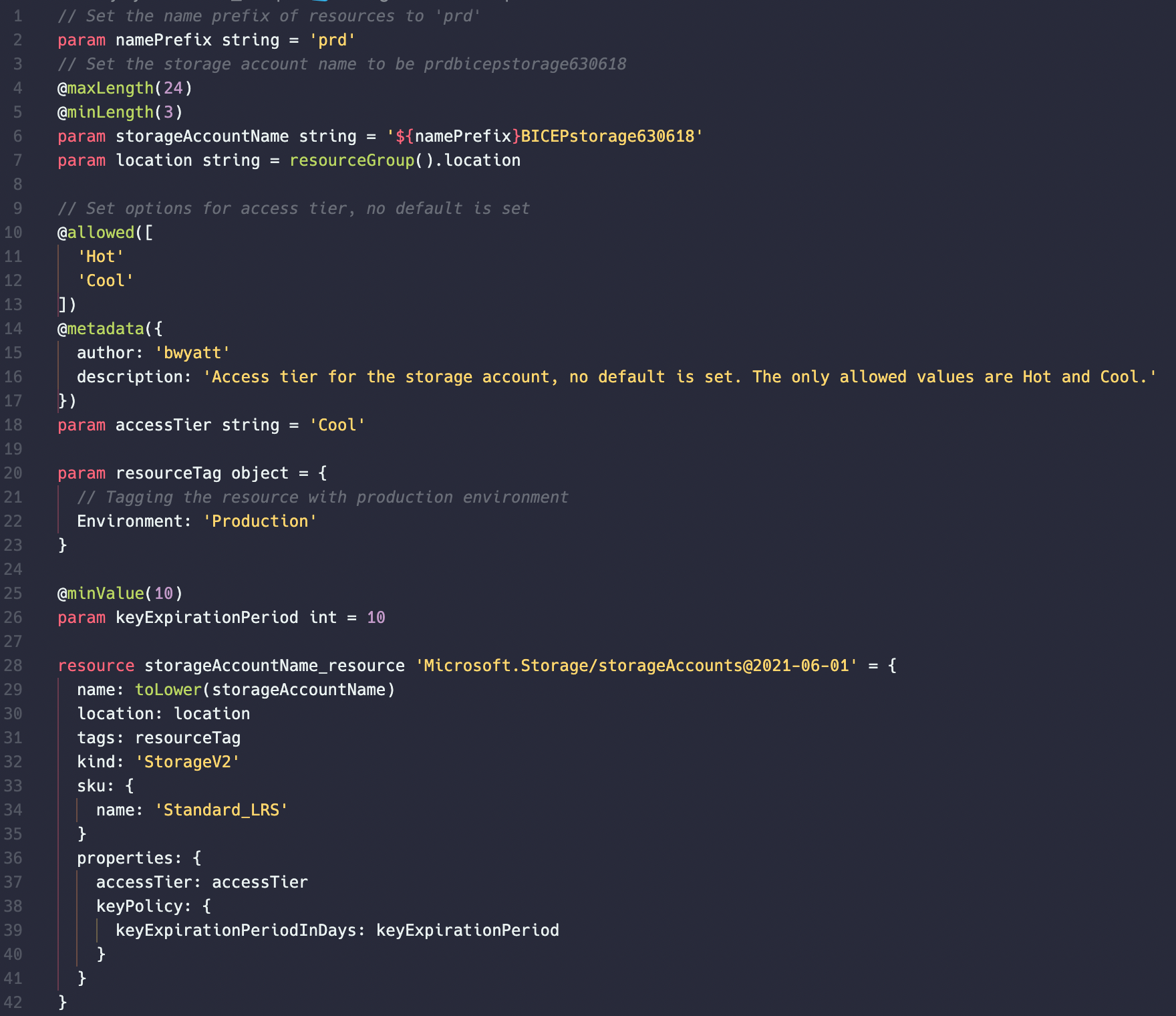 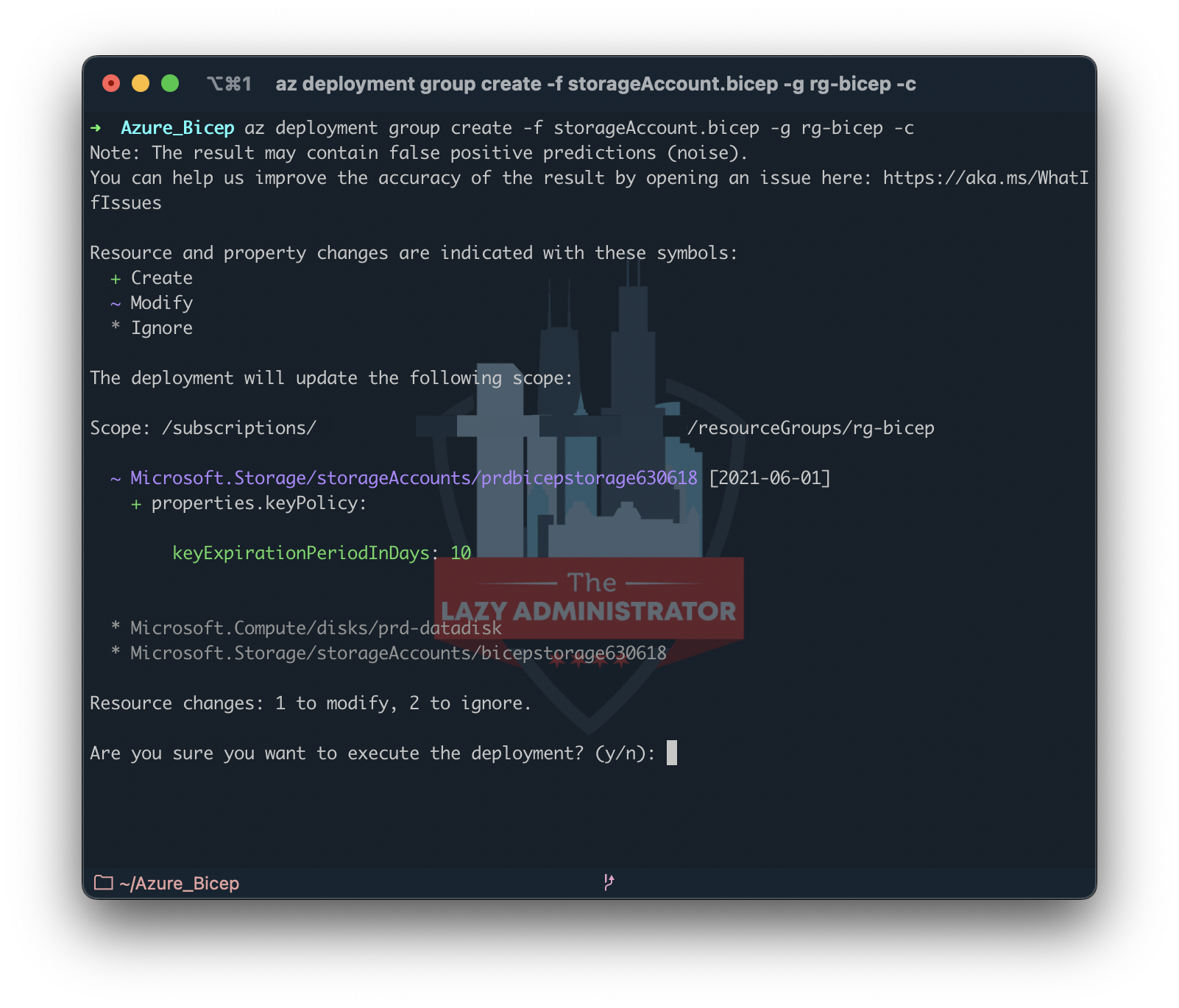 maxValue does the opposite and sets a maximum int value that the parameter can have. In my example below I set the maxValue at 90 days. 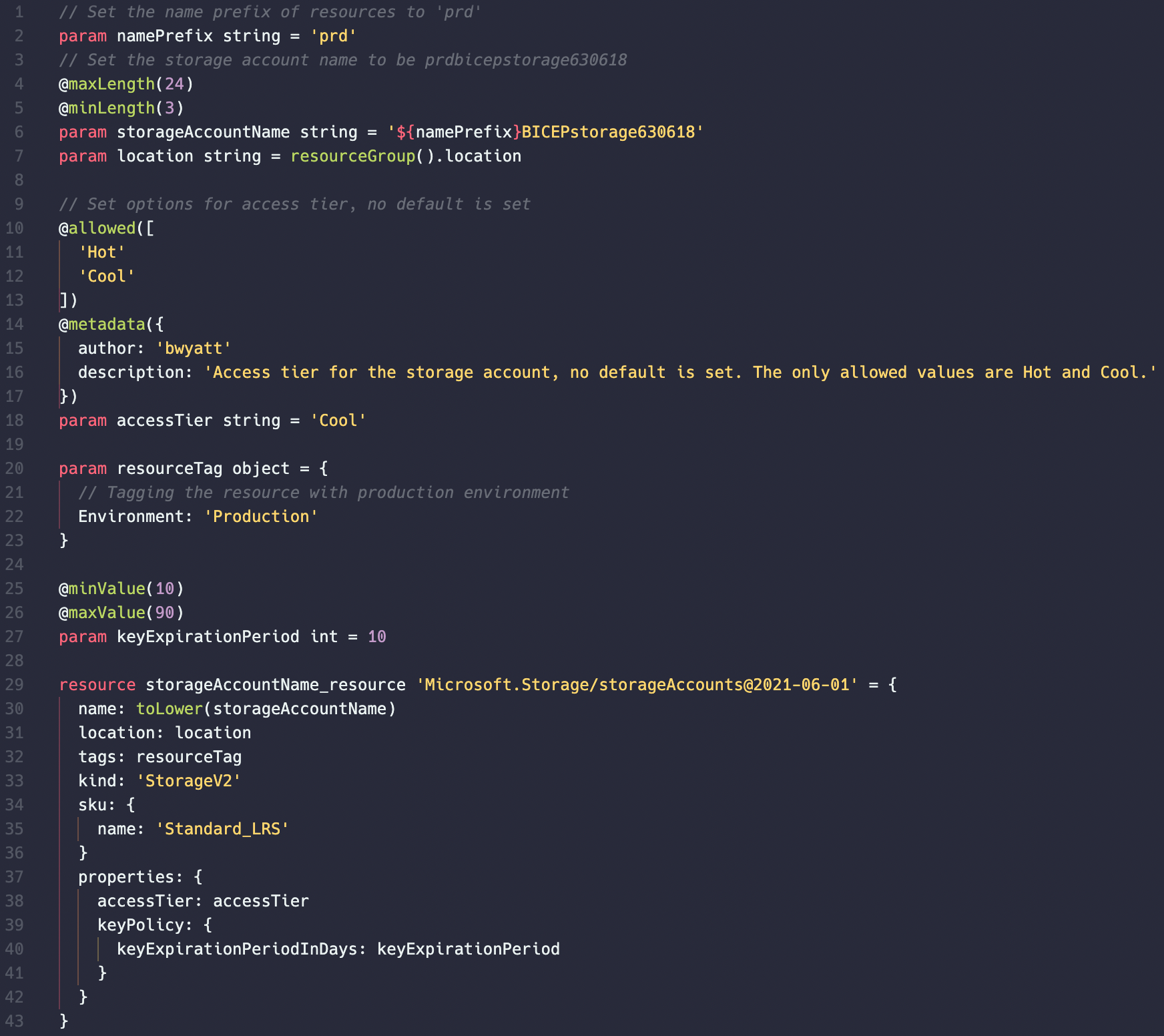 The @secure parameter decorator marks your parameter as secure and prevents the parameter’s value from being saved to the deployment history and logs. It will not transform any plaintext value in the deployment file itself to anything but plaintext. If you have a parameter that uses @secure it should not have any default value.

In my example below I modified the namePrefix param for my storage account from a hardcoded value of ‘prd’ to null. I also used the @secure parameter decorator to indicate that the parameter value should be secured. When I run the deployment I am prompted for the value, which is not shown even on the console.

@secure is used more when you need to enter a secret value, like a password or key. 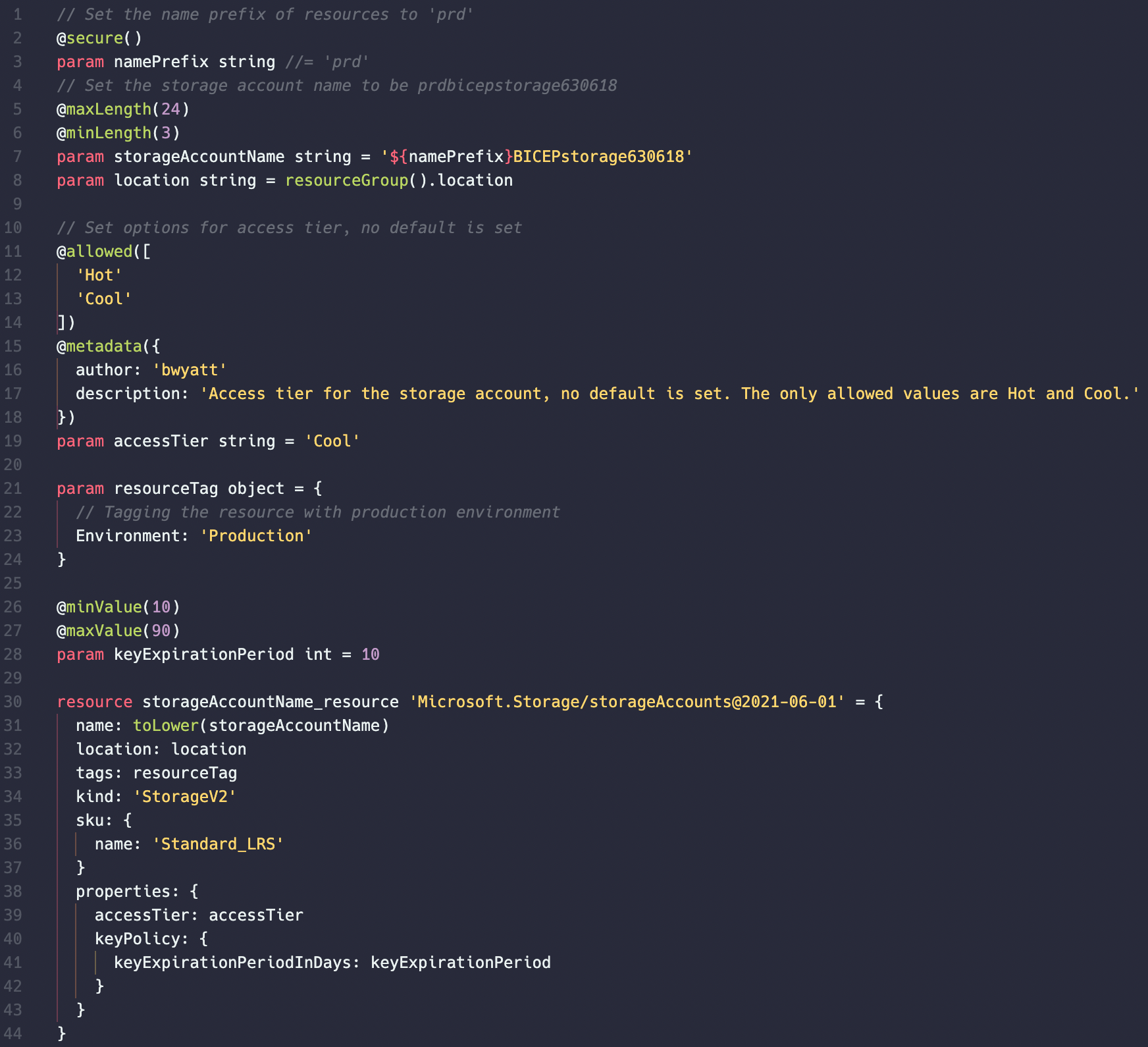 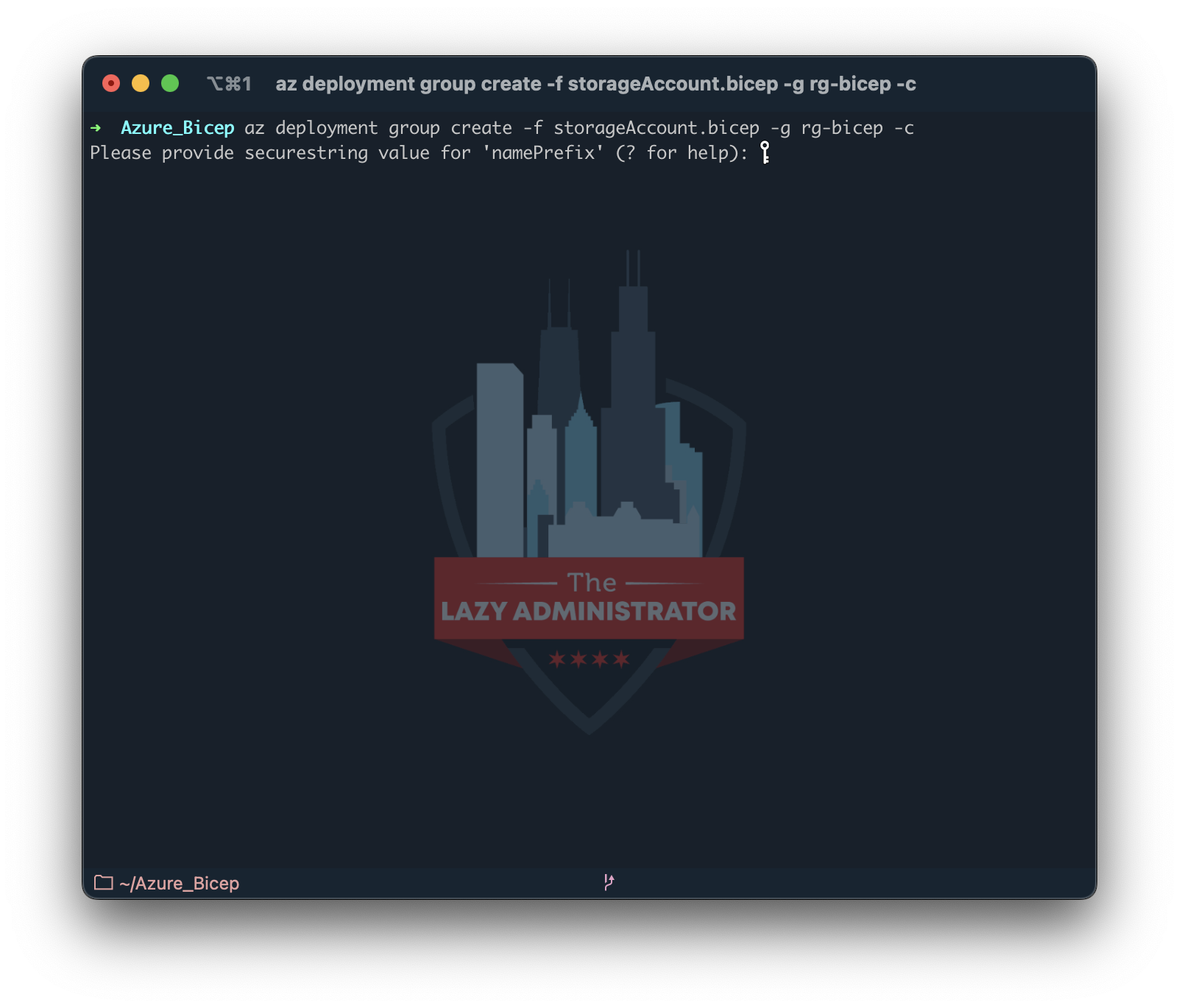